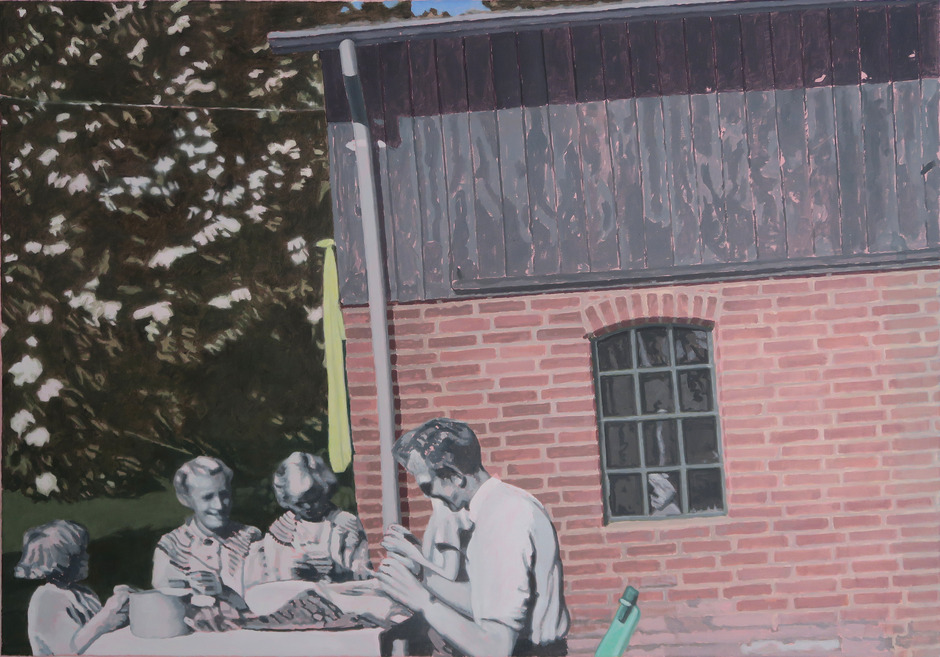 How does one render a memory? How does time take shape in a painting? And how may a very personal family history serve as the starting point for new and pictorial investigations?

These are but a few of the interesting questions posed by Bjarke Regn Svendsen’s recent works – questions which we, in his coming solo exhibition, unfold spatially in the exhibition halls of the museum.

Bjarke Regn Svendsen has moved onto a new track in his artistic praxis, and now he has thrown himself into working with ‘auto fiction pictures’ that use as their starting point old black and white photos from various family albums. I his most recent paintings he has decided to investigate the relations between reality and fiction in a completely new way. This series of works may thus be characterized as a kind of self-investigation, in which the story of his own personal life, including portraits of himself as a confirmand, are processed as sort of ‘historical selfies’.

As part of the project, old amateur-like, and in some cases shaken or ‘weird’ family photos, taken by e.g. the artist’s mother, are enlarged and reproduced as paintings. But often parts of the motives, in many cases the person portrayals, are in black and white, while other parts are in colour. This simple, but radical, touch makes the paintings strangely unreal – the people seem to be inserted as templates in otherwise authentic, spatial contexts, or they appear to be almost ghostlike beings visiting from ‘the other side’. The sensation of family members who are both present and absent is reinforced by how Bjarke Regn Svendsen has taken the liberty to remove and relocate both single elements and people in his compositional and pictorial deliberation process. In this way his new series of works evolves around, period images historical documents, and pure abstractions – in a mix of reality and fiction, present and past, absence and proximity, old age and childhood, photo and painting.

Bjarke Regn Svendsen was born in 1949 and lives and works in Tistrup a little north of Esbjerg. He is represented in the collections of Esbjerg Art Museum, and his latest exhibition at the museum was with the solo project HOTEL in 2009-10, from which the Danish Arts Foundation acquired several works.